That’s right, you can now download the V4 skin for DTXMania! It took me almost a year to finish this and I’m really happy with the result.

V4 Skin For DTXMania Version 067b

Those are the links to the downloads. I’ll also put them in my Downloads page.

There are actually 3 downloads to choose from. That’s because the skin is available for 3 versions of DTXMania, namely 061, 067b, and 070. I personally prefer 070 although it looks like most people use 067b. Oh and I included the one for 061 since that’s where I originally made the skin. I just ported it to 067b and 070. 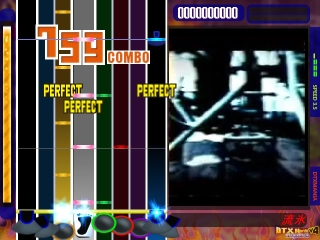 One thing you’ll notice about the skin (Once you use it) is that I did not mess with the sound files. (Although I did remove the Title Screen sound for the version 061) I’ll post some add-on packs in the future containing V4 sounds. (I already have some here in my computer) Also, the whole skin has this purple-pinkish feel. I think it looks pretty nice. I tried to make the GuitarFreaks/DrumMania V4 look of this DTXMania skin as realistic as possible so I do hope you’ll like the skin too. 🙂